The LPMMC regrets to learn about the disappearance of two influential theoretical physicists, Freeman Dyson and Philip Anderson, both at the very respectful age of 96. As from its foundation in the early nineties, the LPMMC has benefited a lot from the work of both physicists, and many activities of the LPMMC, up until today, have been inspired by their works.

The list is too long to be exhaustive. We would like to mention the study of Anderson localization of phonons to explain the anomalous heat transport in glasses. After his discovery of quantum metal-insulator transitions driven by disorder, Anderson’s “theory of white paint” speculated about the localization of light. The localization of interacting particles in the many-body Fock space (often referred to as ”many body localization”), electromagnetic and elastic waves, and more recently of cold atoms, has been a topic of intense activity of the LPMMC. The scaling theory of localization published in 1979 with Abrahams, Licciardello, and Ramakrisnan is considered as a unique standard reference in condensed matter physics.

The famous Dyson equation for the dressed one-particle Green function and the Wigner-Dyson ensemble in random matrix theory have become standard equipment for many members of the LPMMC. Dyson’s results on localization in one-dimensional harmonic chains achieve new interest in the novel study of superconducting meta-materials, such as Josephson junction chains. Dyson also made major contributions to the mathematical foundations of quantum mechanics, in particular he gave the first proof (jointly with with Andrew Lenart) of the stability of non-relativistic bulk matter. In 1957 he gave the first mathematically rigorous demonstration of equilibrium properties of dilute Bose gases, a result that is still of great importance to today’s cold atoms experiments, and that could be improved upon only 40 years later, Last but not least, the only mathematical demonstration available today for the existence of a phase transition in quantum spins systems was given by Freeman Dyson, Elliott Lieb and Barry Simon in 1976.

In his famous essay “More is Different”, Philip Anderson made a major contribution to the philosophy of science. By using the spontaneous breaking of gauge symmetry as an example, a mechanism nobelized in particle physics to yield mass, but in condensed matter physics well-known to be invented by himself to describe the Meissner effect in superconductivity, Anderson positioned himself against the “theory of everything” and argued that new rules will always emerge as the complexity increases. Also Freeman Dyson made major contributions outside theoretical physics. He struggled with the origin of life, and also emphasized that “failure” is an important condition for progress, a message that scientific funding agencies often do not want to hear. 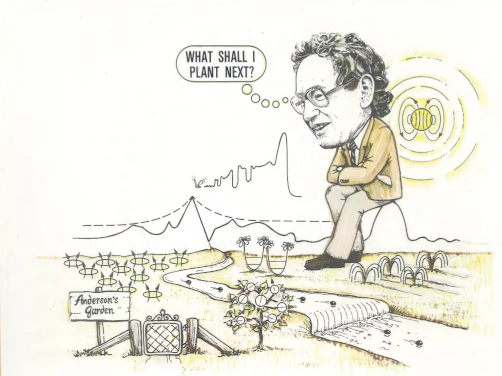 Taken from G. Baskaran, Random walks in Anderson’s garden, in : PWA 90, a lifetime of emergence (World Scientific, 2016). The author of this picture seems to be unknown.